Elly Paterson is the main female character in the comic strip, For Better or For Worse by Lynn Johnston. Her chain-smoking brother, Phil, is being pressured to quit smoking but isn’t finding it easy. Finally he’s down to his last cigarette before facing a smoke-free future, as illustrated in the Friday, March 18th, comic strip. So what does he do?

Surprise! Yes, he’s weak, and as addicted to nicotine as Missouri’s state legislators are addicted to tobacco industry money. This is revealed starkly in the following table listing donations each state senator has received from Big Tobacco and their allies (cigarette retailers and convenience stores). As noted in a cover letter MoGASP recently received accompanying the following data, “the Missouri Senate is Marlboro Country.” Out of 34 senators, all but one, Sen. Jill Schupp (D-24), have accepted campaign donations from Big Tobacco and/or their allies. Not surprisingly perhaps, Republicans, who control both the Senate and the House, received over 90% of the $394,710 total, but the Democrats still didn’t fare too badly, as shown in the table and detailed information below.

I’m reminded of a leaked 1989-1990 Philip Morris* regional lobbyist report for the southwestern states [ref. 1]  boasting of their success at controlling the Missouri legislature. The lobbyist described it this way:

“MISSOURI: This is a [sic] close [to complete control] as you are going to get. We are members of everything but our contract lobbyist works very closely with the tobacco wholesalers and they do anything we ask for. Surprisingly, the Chamber of Commerce is usually very helpful statewide and on a local level. We work well with the restaurant associations. We sponsored a golf tourney for the wholesalers and a party boat cruise on Lake of the Ozarks with the restaurant folks for the Black Caucus.” 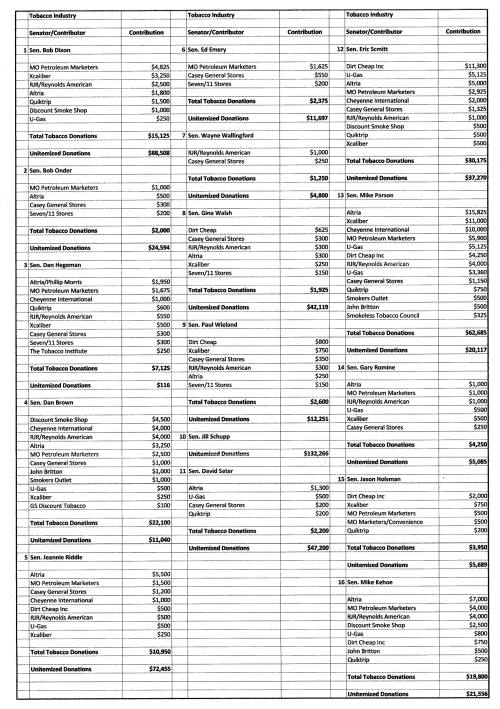 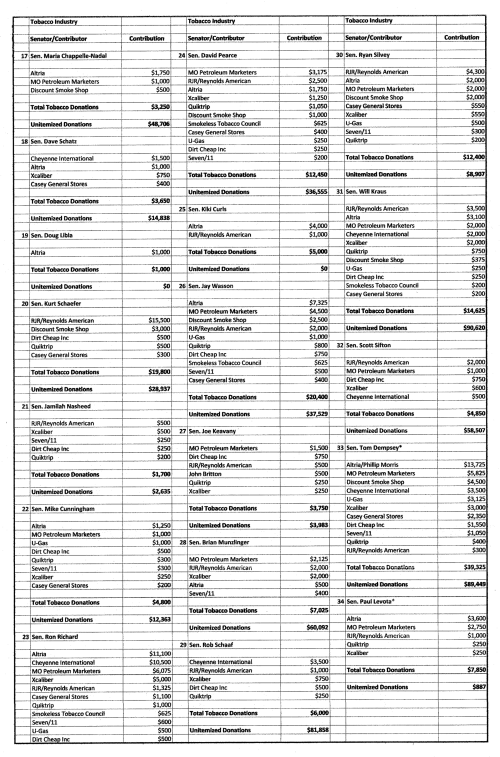 *Philip Morris became Altria in 2003 in a move designed to shield the company from possible crippling tobacco-related lawsuits.