This news story on PBS Weekend edition, which I just finished watching, is interesting. It’s about Westminster, a small Massachusetts town up in arms over a proposal by its three member Board of Health to ban the sale of all nicotine products within the city, citing public health benefits. If it does so, it will be a first in the nation.

However, at a recent Board of Health public meeting almost all the residents attending were apparently opposed, as well as local businesses who argued that jobs and consumer freedom is at stake.

It’s a typical battle of health versus wealth that we’ve seen played out here in Missouri for decades, including in St. Charles and St. Charles County where the Ameristar Casino calls the shots.

Those of you familiar with this issue will note some typical responses by opponents, such as the slippery slope argument of one retailer, who also claimed he’d lose two-thirds of what he pays his employees if sales were banned.

The very first comment in the TV broadcast from a member of the public attending the meeting was this: 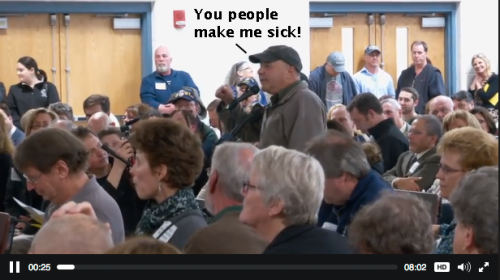 You people make me sick!

That’s pretty ironic, as I suspect the reporter was all too aware.

Below is pasted the transcript from the above website:

NewsHour Weekend’s WILLIAM BRANGHAM reports: The town of Westminster, Massachusetts — population 7,300 — is a small, quiet community about an hour west of Boston.

When the local health board holds meetings, it usually happens here in this room, where you can get advice about things like septic tanks and mosquito control. But not on this day. This meeting Wednesday night had to be moved to the local elementary school because the town is up in arms.

MAN: You people make me sick!

WILLIAM BRANGHAM: Why so mad? That Board of Health is proposing to make Westminster the first town in the entire country to completely ban the sale of tobacco.

ANDREA CRETE, WESTMINSTER BOARD OF HEALTH: It can be argued that the Board of Health permitting these establishments to sell these dangerous products that, when used as directed, kills 50 percent of its users, ethically goes against our public health mission.

WILLIAM BRANGHAM: The town’s proposal would make it illegal to sell any product containing nicotine within city limits. So no cigarettes, chewing tobacco, cigars, vaporizers. You’d still be able to smoke or use tobacco in town, just not buy it.

ANDREA CRETE: If we can prevent children from having access and exposure to tobacco and nicotine products and reduce the chances of them smoking or using them, then we’ve essentially saved lives.

WILLIAM BRANGHAM: While it’s already illegal for kids to buy tobacco, the health board says the tobacco industry makes products like these — shiny, fruit flavored cigars and tobacco products — in order to lure kids into a lifetime habit. The industry denies targeting kids.

WILLIAM BRANGHAM: The effort began when one of the three health board members suggested the tobacco ban, following the lead of other health boards in other Massachusetts towns that had limited where residents could smoke or what kind of tobacco products they could buy. Westminster’s volunteer board then consulted a specialist to examine the pros and cons of a total ban.

WILLIAM BRANGHAM: They talked with D.J. Wilson is the tobacco control director for the Massachusetts Municipal Association, a policy group that advises local towns.

D.J. WILSON: We would never have guessed 10 years ago that there would’ve been 49-cent grape cigars available to kids, or that electronic cigarettes would’ve come in– that they existed at all, or come in cotton candy flavors. I don’t speak for the Board of Health, but I think their goals — they are tired of having different products pop up that are very kid friendly.

WILLIAM BRANGHAM: The biggest opponents of the proposal are the seven local stores in Westminster who’re licensed to sell tobacco. They’re almost all opposed.

BRIAN VINCENT: Thanks everybody for coming today–

WILLIAM BRANGHAM: Store owner Brian Vincent has been one of the most vocal. He owns Vincent’s Country Store on Main Street in town. It’s a medium-sized grocery store that Vincent’s dad started and ran for 18 years. He says no store in Westminster has ever been cited for selling tobacco to kids, and banning it would cost more than just tobacco sales.

BRIAN VINCENT: Most people that buy tobacco will grab a cold drink for the road, maybe scratch tickets, a bag of chips. So it’s not just an $8 sale, it’s a $20-30 dollar sale.

WILLIAM BRANGHAM: Vincent points out there are several neighboring towns around Westminster full of stores that sell tobacco, so he says the ban would just drive customers — and their money — elsewhere.

BRIAN VINCENT: We’re just going to be sending all these sales 5 minutes down the road to another town where these customers will spend money on gas out of town, food out of town, and before you know it the gas stations are going under in Westminster and other businesses.

WILLIAM BRANGHAM: Another concern that’s been raised is the potential impact on jobs. Most mornings at the Depot General Store, you’ll find a few regulars hanging
out, having coffee before work.

WOMAN: This better be a winner, because wouldn’t that be great?

WILLIAM BRANGHAM: Chris Bjurling has owned this small convenience store for 22 years. Like a lot of businesses, he supports the local police and kids’ sporting teams. He also employs seven people, several of them full time.

He’s calculated that losing the tobacco and related retail sales would cost him roughly two-thirds of the money he uses to pay those employees. And for some of them, these are crucial jobs.

CHRIS BJURLING: It becomes very personal — these people are important to me. Lisa has been with me for 18 years. Denise has been, I’d have to ask her, but I’m gonna say 12 to 13 years. For Lisa, I am her entire income. She in fact will lose her house if–

WILLIAM BRANGHAM: We’ve heard from several local businesses that if tobacco is not allowed to be sold here that’s gonna really hurt their business here and could jeopardize local jobs. If that’s true, do you think that that economic pain is worth the public health benefit?

D.J. WILSON: Well you know, I mean, there has been a lot of quantifying that a lot of the diseases that are caused from smoking have cost us in the state tens of millions and nationally hundreds of millions of dollars. It is a huge cost — tax burden to the American people, to the American workforce to have people on disability and having to retire earlier because they smoked for a lifetime. So, that is something that you have to weigh against the loss of profit from selling tobacco products in a retail store.

WILLIAM BRANGHAM: According to the U.S. Surgeon General, tobacco-related illnesses cost an estimated 300 billion dollars a year in medical care and lost productivity, to say nothing about the lost or shortened lives.

WILLIAM BRANGHAM: In Westminster, while local businesses have been the main critics of this plan, it seems many local residents don’t like it either. And not just the smokers. Of the two dozen or so people we spoke with, we could find only one resident who supported the ban.

MAN: I just praise the community that’s standing up for it and making a statement for it maybe it will become more of a norm in the future.

WILLIAM BRANGHAM: But that was definitely the minority position.

WOMAN: They are leaving’ us no choice but to take our business out of town.

WILLIAM BRANGHAM: Even someone like Jim Patria — who smoked for 30 years, now has chronic pulmonary obstructive disease, can barely breathe even with an oxygen tube in his nose — even he’s against the ban.

I mean you of all people you should know why the town would want to stop smoking — you have all these health conditions from it — but you still think banning it is a bad idea.

JIM PATRIA: Yeah, yeah, I do. I don’t if I have a great explanation for my feeling but I do.

WILLIAM BRANGHAM: Is it that you don’t want the government telling you what you can and can’t do?

CHRIS BJURLING: Is it alcohol next? Or is it the candy bar? Too much sugar. And they say “Oh no, we wouldn’t even consider something like that,” but when you crusade, once accomplish one crusade, you gotta have another one. I mean, it’s in your blood now. You want more success. And they’ll go on to something else.

WILLIAM BRANGHAM: At that town hall meeting Wednesday, the Board of Health got an earful.

MAN: Whether it’s me, my children, my family, my friends, or my neighbors, is their free choice to smoke. This meeting, with all these cameras here, is a mockery of this town in front of the United States of America!

WILLIAM BRANGHAM: The residents of Westminster don’t get to vote on this proposed tobacco ban. City officials don’t get to vote either. The decision will be made by the three member Board of Health. They’re supposed to decide later in December.

WILLIAM BRANGHAM: When some of the crowd got too unruly, the board cancelled the hearing after just four speakers.

ANDREA CRETE, WESTMINSTER BOARD OF HEALTH: All right, this hearing is closed. Thank you all for coming–

WILLIAM BRANGHAM: The police escorted the chair of the Board of Health out the door and safely to her car, while someone tried to get the crowd to sing ‘God Bless America.’

Yes, folks, Mr. Butts, aka “Big Tobacco,” is rebuking the U.S. states for spending so little of the estimated whopping $256 billion tobacco settlement money they’re due to receive over 25 years on anti-smoking efforts. Cartoonist Gary Trudeau illustrates it thusly:

That’s certainly true in Missouri, where in most years virtually NONE of the tobacco settlement money has been spent on such efforts, despite Missouri having received tens of millions of dollars. I recall Republican Matt Blunt, when he was Missouri Governor, did propose a trifling $1 million effort one year, which was rejected by the legislature. (That was better than his Democratic counterpart, incidentally.)

The national group, Campaign for Tobacco-Free Kids, tracks these expenditures and the latest data for Missouri for FY2014 includes the following: 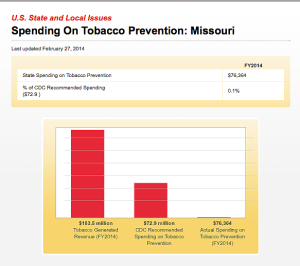 According to this graphic, Missouri received more than $183 million from the settlement in 2014. The CDC recommended that nearly $74 million of that should be spent on tobacco prevention. Missouri actually spent a paltry $76,364, or 0.1% of the recommended amount.