The dramatic description of a Lambert-St. Louis International Airport smoking room as a “Death Box” was coined by a British airline passenger during a TV interview while sitting near one in July 1998.

Judy M., a long-time Missouri GASP supporter, just sent me photos of similar smoking rooms during a layover by her and her husband, Jim, in Frankfurt International airport, Germany, in early October, 2012, this time bearing the Camel brand logo. 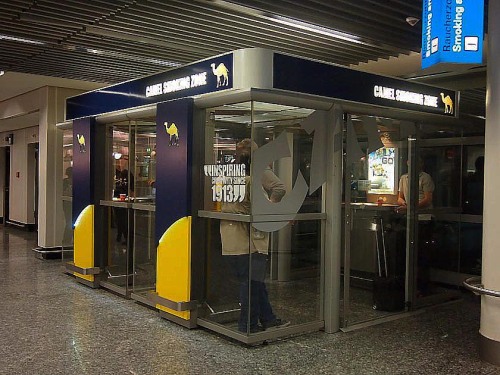 There are no exhaust vents visible in the photos but even with them, it’s expected that there will be some diffusion of secondhand smoke into adjacent nominally smoke-free parts of the airport, and even if it’s equipped with a door, which appears to be the case here. (See right hand side of smoking room in second photo. where the entrance door, either sliding or regular door, appears to be located.)

Judy accompanied the photos above with these comments:

Jim had a meeting in Dresden, Germany in early October. We had a flight layover in Frankfurt. I have to confess it struck me that it was like looking at people in a zoo when I saw what is pictured in the two attached photos. I asked permission to take them as we’ve had problems with such things at train stations and airports in various places in Europe due to security issues. No problem with photographing that particular view, they said.
Though the brightness of the light made it difficult to read, I’m sure you can see that this is the “Camel Smoking Zone.” Of course, the words weren’t/aren’t necessary …. because of what I could smell as I walked by.
In other words, they are NOT 100 percent effective.
I was also amused by the “Inspiring Creativity since 1913” phrase (seen in the second photo near one corner of the enclosure). I could think of more accurate things to write. I went to Google and entered the phrase to determine if that is a Camel statement or by the makers of the smoking room and found lots of sites where people had taken the same photo–and made various remarks about the statement.

Emulating Judy, I did a quick Google search and turned up the following photo of a Camel smoking room in the same airport:

It was accompanied by this comment 3 months ago by Tony Hawk: