The editorial went on to argue persuasively why it was perfectly reasonable to legislate in favor of smoke-free air laws, and ended by focusing on the despicable behavior by some residents towards former Arnold councilman David Venable for authoring a modest smoke-free air ordinance some years ago.

Sometimes, people are there own worst enemies, but when you’re subject to a powerful addiction that can trump common sense.

Editorial: Jefferson County, the last refuge of the persecuted smoker
By the Editorial Board | Posted: Tuesday, April 10, 2012 12:10 am |

That 30 percent of adults in Jefferson County smoke tobacco products — as compared with an average of 24 percent in Missouri overall and 19 percent in the United States — raises a red flag for possible health problems. Monday’s troubling report by the Post-Dispatch’s Leah Thorsen suggests that some residents there don’t see it that way.
Jefferson County’s smoking rate is among thousands of pieces of data compiled in this year’s county-by-county “Health Rankings and Roadmap” report from the University of Wisconsin’s Public Health Institute and the Robert Wood Johnson Foundation.
Smoking rates fall under the report’s broader category of health behaviors, in which Jefferson County ranked 106 out of 115 Missouri counties. In our region, only Lincoln County (at 108th) and the city of St. Louis (at 110th) ranked worse.
Other factors figuring in the health behavior rankings are rates for heavy and binge alcohol use, births to girls and young women ages 15 to 19, infection with sexually transmitted diseases, obesity and physical activity. The rates are culled from information at the U.S. Centers for Disease Control and Prevention.
Here’s a risk factor the report missed: rugged individualism.
“They like to choose what they want to do and don’t want to do out here,” one Jefferson County smoker told Ms. Thorsen. The story cited historical feelings of “fear of government overreach and intrusion on personal choices” among people in the county.
More than a decade into the 21st century, smoke from of the tobacco industry’s long-discredited campaigns against laws limiting smoking still wafts through the hills of Jefferson County. 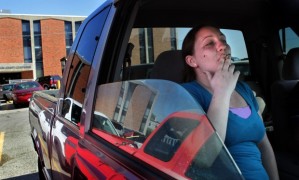 Smoking is not a liberty issue; it’s a health issue. You have the right to smoke yourself into an early grave if you like, but your personal freedom to smoke ends when it ceases to be personal — that is, when the smoke wafts onto and into someone other than the smoker.
Nor does any business that opens its doors to the public enjoy an unrestricted right to operate as its owner chooses. Restaurants and bars in particular — whose owners often fight against proposed smoking limits — routinely accommodate other rules and restrictions designed to protect public health and safety.
These include occupancy limits, the installation of smoke detectors and fire-suppression systems, temperature specifications for handling meats and other perishables and separate preparation surfaces for cooked and uncooked foods.
There are regulations governing the operation of slicing machines, sanitation practices by employees and restroom facilities for customers, access for people with disabilities, standards for electric service and plumbing systems and much, much more.
Controlling toxic tobacco smoke is no more an abuse of government power than keeping customers and employees safe from lead dishware, flaming burners and undercooked chicken.
Ms. Thorsen’s story, however, included one account of real abuse: the treatment heaped on David Venable during his past public service as a city councilman in Arnold. In 2004, he wrote the city’s smoking-control ordinance. Pioneering at the time, it was modest by today’s standards.
Even so, Ms. Thorsen wrote, “People came out of their houses to scream and curse at him…. ‘It got to the point I was thankful my daughter was deaf,'” Mr. Venable said.
Harassing a public servant walking with his child because you disagree with an ordinance? Most of the good people of Jefferson County have better sense.