Not mentioned anywhere in this story, but deserving to be for historical reasons, is Ernest “Ernie” Wolf, who operated Skytop Sunroofs Ltd in St. Louis for twenty years until 1992.
He was a pioneer in only hiring nonsmoking employees well before it became accepted practice.
He found that his nonsmoking employees were more productive, they didn’t take as much sick leave, and had lower healthcare and life insurance coverage costs than smokers.
Ernie Wolf and the union ended up agreeing to only add nonsmokers to the workforce, the same policy as SSM Healthcare is about to implement.

Following is a comment I submitted earlier to the St. Louis Post-Dispatch comments page following the SSM hospital story, which is arousing a lively debate among readers:

Martin Pion said on: June 17, 2011, 11:31 am
This is a contentious issue.
Missouri GASP doesn’t take a position on it, but speaking personally, if I were to hire an employee to work in my home office they would have to be a nonsmoker. I wouldn’t be prepared to allow them smoking breaks outside and wonder where they’re throwing their cigarette butts for me to pick up after them. Plus, they would still be smelling of tobacco smoke when they came back inside my house. And finally, even when smoking outside, I would be concerned about the smoke wafting in my direction if I were to go outside myself.
Yes, I can certainly understand smokers feeling unfairly targeted by an employer’s policy of only hiring nonsmokers, but one could argue that it’s another incentive for smokers to quit.
http://www.mogasp.wordpress.com 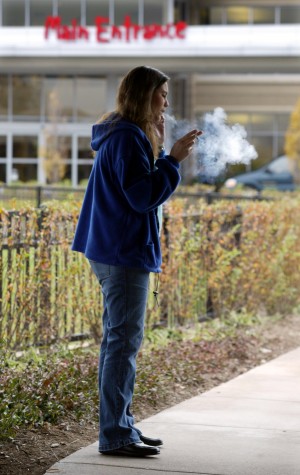 11/16/04: SSM Healthcare is instituting a policy Thursday that will prohibit smoking on their property. Sonya Johnson of Portageville, Mo. takes a break for a cigarette outside Cardinal Glennon Hospital Tuesday. Her daughter Bailey, 4 mos., is being treated there for an undiagnosed infection.
File photo by Karen Elshout

Sonya Johnson was quoted in the photo caption as saying: “I think it sucks that the hospital is going to force us to go elsewhere to smoke, ” she said. “This isn’t the safest neighborhood. Aren’t we stressed out enough?”

Smokers need not apply at SSM Health Care hospitals, which will start a tobacco-free hiring policy next month.
Job applicants at the seven SSM hospitals in the St. Louis area will be asked whether they have used tobacco in the last six months. Anyone who answers yes will be eliminated from the hiring process.
“As an organization that provides health care, we want to encourage our employees to take better care of themselves and set good examples for our patients,” said SSM spokesman Chris Sutton.
Cost-cutting is a side benefit of the new policy, Sutton said, because “healthier employees does mean lower health care costs.”
Text STLTODAY to 21321 to download the free Post-Dispatch news app.
Each smoker costs a company an additional $3,400 annually in health care costs and lost productivity, according to the federal Centers for Disease Control and Prevention.
Current SSM employees will not be bound by the policy when they’re off-duty. All SSM facilities have been tobacco-free since 2004.
Thursday evening, beyond the parking garage on the east side of St. Mary’s Health Center in Richmond Heights, a half dozen hospital employees were lighting up on a city sidewalk. Word of the new policy came as a shock.
“They wouldn’t hire you because you’re a smoker?” said Angela Mueller, who said she has been working at the hospital just over a month. “That’s not right.”
The new policy will apply only to SSM hospitals in Missouri, where about 25 percent of adult residents smoke. About 6,000 companies nationwide have stopped hiring smokers, according to the New Jersey nonprofit National Workrights Institute. Missouri law supports the practice for certain employers, including health care providers.
SSM officials said they will lobby for similar legislation in Illinois, Wisconsin and Oklahoma, where they also operate hospitals.
Workers’ rights groups argue that the shift to a smoke-free workforce could lead to similar crackdowns on health behaviors like drinking alcohol and eating fast food. Others have warned that the policies punish lower-paid employees like janitors and cafeteria workers who are addicted to nicotine.
“If enough of these companies adopt these policies and it really becomes difficult for smokers to find jobs, there are going to be consequences,” said Michael Siegel, a professor at Boston University School of Public Health. “Unemployment is also bad for health.”
The trend started 20 years ago when companies like Union Pacific, Turner Broadcasting and Alaska Airlines adopted smoke-free hiring policies.
Since then, more than half the states have passed laws that prohibit discrimination against smokers.
But courts in some of those states have upheld the hiring bans when challenged.
Health care providers have led a more recent trend away from employing smokers. The Cleveland Clinic stopped hiring smokers in 2007. Hospitals in Florida, Georgia, Massachusetts, Ohio, Pennsylvania, Tennessee and Texas have recently made the move.
Staring this year, St. Francis Medical Center in Cape Girardeau, Mo., only hires nonsmokers.
“We felt it was unfair for employees who maintained healthy lifestyles to have to subsidize those who do not,” Steven Bjelich, the hospital’s chief executive. “Essentially that’s what happens.”
Most smoke-free policies are enforced with the honor system. Truman Medical Centers in Kansas City investigates accusations of tobacco use and has fired employees who violate the smoke-free policy.
BJC HealthCare, the largest hospital system in St. Louis, has no plans to implement a tobacco-free hiring policy. The company provides discounts on health insurance to nonsmokers and offers incentives to employees to quit smoking.
West County EMS and Fire Protection District has mandated since 2010 that all employees abstain from smoking or chewing tobacco. The firefighters union unanimously approved the policy.
There have been few challenges to employee smoking bans.
In the 1980s, a firefighter in Oklahoma City sued after being fired for smoking during a lunch break.
The court eventually ruled that anti-smoking policies are reasonable to protect employees’ health.

Marlon A. Walker of the Post-Dispatch and The New York Times contributed to this report.