Reminder: A comment for consideration must be accompanied by your full name. First name only or a pseudonym is not normally accepted. Please limit your comment to 1,000 characters and also avoid epithets and personal attacks.

This story, which appeared last month in the Riverfront Times, has prompted a reaction from an O’Fallon councilman who opposes smoking restrictions. The councilman has now followed through on a threat to file a complaint with the IRS alleging that the not-for-profit group, Tobacco-Free St. Louis, is engaging in lobbying efforts which are forbidden under IRS rules. Pat Lindsey, who heads TFSTL and is a veteran in the field, defends the group’s actions as legitimate and within the scope of a recently awarded federal grant. 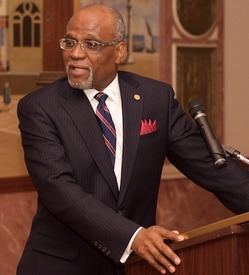 County Executive Charlie Dooley: Is he about to get his way on smoking ban exemptions? Tobacco-Free St. Louis says yes.

The non-profit agency Tobacco Free St. Louis has a $545,000 contract with St. Louis County to — among other things — urge the county council to remove exemptions from the county smoking ban.
As we reported last week, the contract is being paid with federal stimulus funds, raising questions about whether federal tax dollars are being used to pay for lobbying (which is strictly verboten). Non-profits are also barred under IRS rules from using any more than “insubstantial” portion of their income on lobbying efforts.

But Pat Lindsey, the agency’s director, tells Daily RFT that any questions about that part of the contract are moot. Getting rid of the exemptions, she implied, is already a done deal.
“We don’t have to lobby,” she says. “There are meetings going on right now with [County Executive Charlie] Dooley and the county health department and the powers that be to remove the exemptions in the smoking ban.”
Adds Lindsey, “We’re not involved.”
So why was that included in the contract’s scope of work? Lindsey says that the Centers for Disease Control, which was the source of the federal grant funding the work, required that the county partner with an active coalition. Lindsey’s group, which is officially titled “Tobacco-Free Missouri — Greater St. Louis Coalition” was basically the only one around that fit the bill.
She insists her agency never even considered doing any lobbying: “We can educate, but we don’t lobby.”
And that’s a good thing: IRS regulations hold that a non-profit with annual expenditures of less than $500,000, which includes Tobacco-Free St. Louis, can spend no more than $100,000 annually on lobbying efforts. Considering the contract with St. Louis County is worth five times that, any lobbying could quickly put the agency’s non-profit status into jeopardy. (Bill Hannegan, director of Keep St. Louis Free, told Daily RFT last week he was thinking of filing a complaint over just that.)
But Lindsey says her agency doesn’t intend to focus on the county council, despite the contract’s scope of work. Confident the exemptions are on their way out, she says cessation efforts will be the agency’s big focus. “It looks like we’re not going to have do much [about exemptions],” she says. “We’re going to be doing other things.”
For the record, Lindsey tells Daily RFT she doesn’t think the county will remove the exemption that allows smoking in casinos any time soon. But, currently, the county allows smoking in bars where food sales are 25 percent or less of the total revenue. (The city ban only allows smoking if the bar is no larger than 2,000 square feet.) Dooley has indicated his unhappiness with the number of places being exempted — and Lindsey tells Daily RFT she’s heard the current level of food sale exemptions is on the chopping block.
“Just the other day, a gentlemen called who said, ‘What’s the point of this ordinance when people who serve food are still allowing smoking?'” she reports. “We’ve received a lot of complaints.”