It’s good to see the City of Clayton treat all violators of its comprehensive smoke-free air law equally, including the Ritz-Carlton Hotel and its high rolling cigar smokers. (Well, not quite that high! They don’t have to smoke out on a window ledge.) 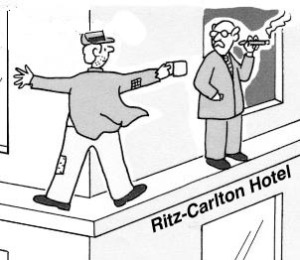 CLAYTON • The Ritz-Carlton St. Louis on Wednesday agreed to pay a fine of $300 and court costs of $26.50 for violating Clayton’s smoking ban by proceeding with the hotel’s annual Cigar Club ball.
The Ritz also agreed to comply with the city’s ordinance in the future, said Clayton Police Chief Tom Byrne.
That apparently means the end of the Cigar Club’s annual black-tie ball in the hotel’s ballroom.
More than 300 people attended the ball on Jan. 22, and smoking was common. The hotel’s lawyers had interpreted a section of the Clayton ordinance — a clause allowing smoking in 20 percent of a hotel’s rooms — to cover the ballroom. (The Ritz does have an exemption for the Cigar Club lounge, but that was too small for the ball.)
Clayton held that the ballroom was not exempt, and police ticketed Ritz general manager Patrick Franssen that night.
Neither he nor anyone else in Ritz management could be reached for comment Wednesday.
But the mood Wednesday afternoon in the Cigar Club lounge was decidedly pro-cigar.
One customer, who asked not to be identified, lamented the loss of the ball.
“It’s a very fun event and wonderful evening for members of a private club,” the man said. “As long as hotel guests don’t complain, I think the privacy of the club ought to be respected.” Smoking bans went into effect in both St. Louis and St. Louis County on Jan. 2. Clayton’s smoke-free ordinance went into effect on July 1.
Mayor Linda Goldstein said last month after the incident that the Clayton Board of Aldermen would review and consider amending the smoking ban ordinance to clarify the wording. She said the management at the Ritz was “very apologetic.”
The maximum penalties for violating Clayton’s ordinance are a $1,000 fine and 90 days in jail.