While checking out Steve Patterson’s insightful St. Louis City blog, Urban Review STL, I came across this one he’d posted on January 5th, 2011:

Readers: Businesses Will Think They Are Grandfathered On New Smoke-Free Laws

In it Steve described going to a restaurant which lacked the required “No Smoking” symbol on the door which prompted him to run a reader’s poll on the subject, and follow up by surveying businesses on Washington Avenue for compliance. He found none displaying the requisite signage. That prompted me to do a quick spot check of a few businesses in downtown Ferguson on Florissant Rd. in North St. Louis County.

Just to recap, both St. Louis City’s and St. Louis County’s smoke-free air laws were approved after Proposition N received more than 65% of the vote on November 2, 2009, but didn’t take effect until January 2, 2010. It was said that the delay was to give bars time to seek and obtain an exemption.

All affected businesses are now expected to display either the internationally recognized “No Smoking” symbol or one like that approved by the St. Louis County Health Department, shown above.

I checked out two businesses in downtown Ferguson where I knew smoking had previously been allowed plus one that I knew to be smokefree. None complied with the law.

The two businesses where smoking has been allowed in the past – Cohen’s Upholstery and Vincenzo’s Italian Ristorante – displayed no signage. The smoke-free restaurant had a small “No Smoking” sign on the inner door predating the ordinance but not one on the outer entry door as the ordinance requires.

It’s clearly more important for formerly smoking-permitted businesses to put up signage and remove ashtrays to comply with the law, since those with a history of being smoke-free aren’t going to deliberately flout the law.

Cohen’s Upholstery has a good reputation for its work. Unfortunately, both owners and employees smoke, and two pieces of furniture re-upholstered for me by Cohen’s smelled of tobacco smoke for months after taking them home.

I visited Vincenzo’s years ago to check it out when it first opened and discovered that as soon as you enter, there’s a bar on the right where smoking is allowed, just across the hall from the entrance to the restaurant.

It’s potentially a restaurant I’d like to patronize on occasions if it were smoke-free, so once I’m sure it is abiding by the new St. Louis County rules I hope to sample its cuisine. 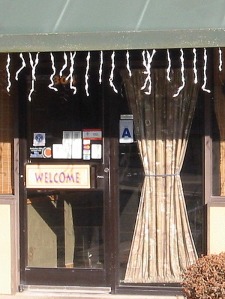 Owner Farzad Faramarzi, who regrettably passed away recently, also ran the Savoy Banquet Center nearby. He was an early booster of the City of Ferguson and his loss was mourned by many.

The Thyme Table started in a much smaller venue on Church Street about a mile further north. While in that location Mr. Faramarzi polled his patrons and found they overwhelmingly supported a smoke-free environment. That’s when his cafe went smoke-free, well before the smoke-free movement started to take hold in St. Louis.
On Thursday, January 27th, 2011, I was pleased to attend Ferguson City Council’s Annual Boards and Commissions Dinner as a member of the Traffic Commission, held at the Savoy. My concern with such events is always: will they be posted “No Smoking” on the entry door and will ashtrays be removed to alert attendees and ensure it’s a smoke-free event?

My experience is that without doing those two things, now required by law, smoking is likely to occur, especially in the bar area. I’ve even seen attendees pop outside to smoke while holding the emergency exit open with a foot, which results in secondhand smoke still migrating inside. With the signage on both the main entry door and the emergency exit and no ashtrays. no smoking occurred at this event.

Close-up of No Smoking sign on Savoy main entry door 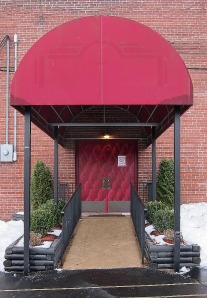 Immediately below is the link to St. Louis County’s Indoor Clean Air Code on the web and below that is reproduced the section listing both where smoking is now prohibited and where it is still allowed.

(Note: Not bolded in the original text but blue bolded here are the sections dealing with the removal of ashtrays and required “No Smoking” signage.)

2. A person having control of a place shall clearly and conspicuously post “No Smoking” signs or the international “No Smoking” symbol (consisting of a pictorial representation of a burning cigarette enclosed in a red circle with a red bar across it) near all entrances where smoking is prohibited pursuant to this chapter. Such signage shall consist of letters not less than one inch in height.
3. It shall be the responsibility of employers to provide smoke-free workplaces for all employees.
4. All employers shall supply a written copy of the smoking policy upon request to any existing or prospective employee.
(O. No. 24105, 8-25-09)

605.060 Exceptions.
Notwithstanding any other provision of this chapter to the contrary, the following shall not be subject to the smoking restrictions of this chapter:

a. Private residences, not serving as enclosed places of employment or enclosed public places;
b. Private clubs;
c. Performers on stage in a theatrical production, where smoking is required as part of the production;
d. Private and semi-private rooms in nursing homes and long-term care facilities, the residents of which are all smokers and have all requested the management of the facility to be placed in a room where smoking is permitted;
e. Retail establishments in which food is not prepared on the premises and where more than 60% of the volume of trade or business carried on is the sale of tobacco and tobacco-related products;
f. Permanently designated smoking rooms, not to exceed twenty percent of the guest rooms;
g. Cigar bars, provided such entity is in operation on or before the effective date of this chapter and provided that smoke does not infiltrate into areas where smoking is otherwise prohibited;
h. Casino gaming areas;
i. Drinking establishments which are in operation on or before the effective date of this chapter; provided, however, that no smoke infiltrates into areas where smoking is otherwise prohibited, and further provided that each such drinking establishment has posted in a place visible to the public from its exterior a certificate of exemption issued by the Department of Revenue pursuant to Section 605.076;
j. Areas designated and posted as smoking areas by the Airport Authority of Lambert St. Louis International Airport pursuant to Section 721.045, Title VII SLCRO 1974 as amended.
(O. No. 24105, 8-25-09)