Columnist, Bill McClellan, writes a sometimes sage, and frequently humorous column several times a week in the St. Louis Post-Dispatch. I often read it and generally agree with him, except when it has to do with smoking. Then Mr. McClellan reveals his Libertarian tendencies, and often writes what I feel are rather biased and ill-founded columns.

Today’s column is about Larry Fiquette who was St. Louis Post-Dispatch Reader’s Advocate for several years. According to the column, Mr. Fiquette is seriously ill with pneumonia in De Paul Health Center surrounded by his family, and his prognosis is poor.

I wrote to Mr. Fiquette after the newspaper published an article featuring complaints from smokers about workplace smoking restrictions. I pointed out that smokers are actually privileged, being allowed smoking breaks for example. He wrote a column on the subject, which I reproduce below.

Some years later I was invited to give a pre-service presentation about Missouri GASP at the Ethical Society of St Louis on Clayton Road. Mr. Fiquette attended and came up to talk to me afterwards to thank me, noting that he supported ASH (Action on Smoking & Health).

I thought he provided a valuable service to readers of the Post-Dispatch and I was sorry when he retired and was not replaced. 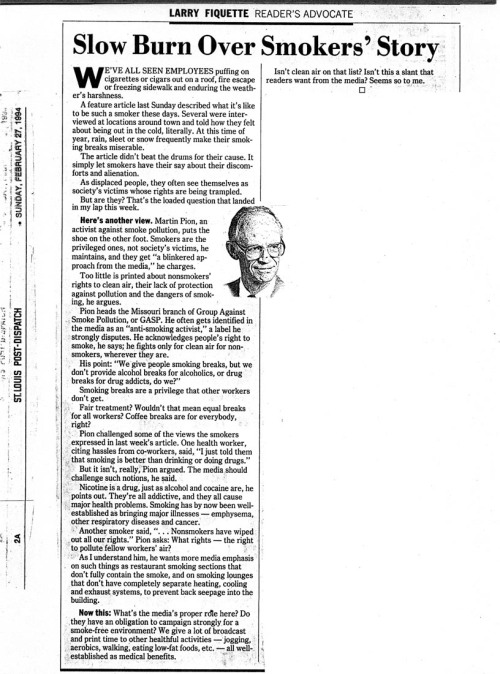