Some people were rejoicing at the news of the first city in St. Charles County to go smoke-free, effective in six months time. Others, not so much. Here’s Bill Hannegan’s unsurprising first comment after it was posted on the St. Louis Post-Dispatch web site on-line:

It is sad to hear that the Pub in Lake St. Louis will suffer the same sort of losses that Van’s Tavern has suffered in Kirkwood. It is a shame that this small business could not have been spared. The St. Louis County Council had the decency to exempt bars, and those exempt bars will be competing with Lake St. Louis bars forever. Why did this have to happen?

The story which prompted the above lament is reproduced below. Note that in the last paragraph it states that “Kirkwood and Ballwin are the only cities in St. Louis County to have bans.” That’s a bit misleading since many, if not most, municipalities in the County have smoke-free air ordinances. It’s just that they have either adopted the state’s weak wording or only strengthened it marginally. For example, the City of Ferguson has added a requirement that all city-owned buildings are smoke-free. The City of Chesterfield is stronger, requiring many restaurants to be smoke-free.

Reporter Mark Schlinkmann also wrote that “The bill would take effect six months after it is signed by Mayor Mike Potter.” That appears to be contrary to a conversation I had with Ms. Donna Daniel, Lake St. Louis City Clerk. She said the Mayor has until the next council meeting on April 5 to sign or veto it, or it automatically becomes law, and effective 6 months after its approval yesterday, March 15, 2010. In other words, the effective date is September 15, barring a veto.

There was a news report on KSDK-TV which features The Pub, mentioned in the Post-Dispatch story: http://www.ksdk.com/video/default.aspx?bctid=72195314001 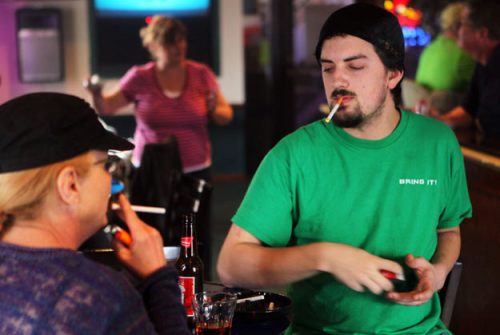 MARCH 15, 2010 — Janice Hurst (left) and Stephen Long, both of Lake Saint Louis, smoke while playing darts at The Pub in Lake Saint Louis. They were opposed to a smoking ban in restaurants, bars and other enclosed areas. “It should just be a personal choice,” Long said prior to Monday’s vote. “We’ll lose one of the only bars in Lake Saint Louis you can smoke in,” Hurst added. (Emily Rasinski/P-D)

The measure, which was approved 4-2, would be the first smoke-free law in St. Charles County. The bill would take effect six months after it is signed by Mayor Mike Potter.

The sponsor, Alderman John Pellerito, said Potter has told him he would sign the ban despite his opposition to it.

Potter, who was out of town Monday and could not be reached for comment, has called a ban an infringement on the rights of business owners. He has until the board’s next meeting April 5 to sign or veto the bill.

Pellerito said his bill would protect Lake Saint Louis residents and people who work in the city of about 14,000 “from the dangers of secondhand smoke.”

Pellerito, who tried unsuccessfully in 2007 for a smoking ban, began pushing the idea again last November. That was a few weeks after St. Louis County residents voted for a smoke-free plan that will take effect in January. A ban in St. Louis also will start then.

Practically speaking, the primary effect of the Lake Saint Louis ban would be on a handful of bars and restaurants that now allow smoking. Various other establishments and buildings already are smoke-free.

Unlike the St. Louis County ban, the Lake Saint Louis plan has no exemption for bars selling a small amount of food.

It would, however, exempt meeting places of nonprofit groups (mainly veterans and fraternal organizations) with no employees. Hotels and motels would be allowed to set aside up to 20 percent of rooms for smokers.

Before passing the smoking ban Monday night, aldermen rejected delaying a vote until after residents can weigh in via a questionnaire or advisory referendum.

“It’s such a large issue,” said Alderman Harry Slyman, who proposed the delay. “It’s not just voting for a stop sign.”

City Attorney Jay Summerville previously advised the board that spending on a nonbinding referendum could be subject to challenge because state law is silent on whether Lake Saint Louis and other fourth-class cities can hold such elections.

So Slyman on Monday emphasized circulating a questionnaire or survey.

Meanwhile, the St. Charles County Council next month is expected to begin public discussion of a proposal to put a countywide smoking ban on the fall ballot.

Kirkwood and Ballwin are the only cities in St. Louis County to have bans. Arnold, in Jefferson County, has a ban. Illinois has a statewide ban. The Missouri Legislature is considering one.