State Senator Joan Bray (D-St. Louis) had an unexpected hearing into her comprehensive Missouri Smoke-Free Air Act, SB 904, on Monday night, February 22, 2010, after a time slot opened up in a committee.

The hearing took place before the Judiciary and Civil and Criminal Jurisprudence Committee, chaired by Senator Matt Bartle (R-Jackson County), in the State Capitol in Jefferson City.

It was reported by KMOX Radio and KOMU (University of Missouri-Columbia, School of Journalism) with stories from both published on-line (please see below). Both reporters noted the absence of any opposition speakers during public comments on the bill, when fourteen people testified.

This has led one of the most vocal opponents of smoke-free air laws, Bill Hannegan of KEEP ST. LOUIS FREE, to cry foul. In an e-mail to me he claimed that it wasn’t fair that opponents weren’t alerted to the hearing but supporters were. In one e-mail he wrote:

“The fact that no one from our side across the entire state showed up makes it clear we did not know. I am going to formally request another hearing so the opposition has a chance to speak. This really stinks.

My e-mailed advice to Bill, which he subsequently accepted, was that he needed to communicate any objections he has to the bill to the committee chair, Sen. Matt Bartle.

There is no question that this effort is now picking up steam, but there are plenty of major hurdles ahead. The tobacco industry remains a major foe in the state capitol, with literally “money to burn,” and money talks at the state and federal level: there’s plenty of evidence for that!

Below are the two stories which are posted on-line. Note that in the first story, KMOX Radio reporter Emily Coleman writes:

“The state ban would supersede any city bans.”

This is not strictly true. If the state law includes wording specifically allowing stronger local ordinances – and it is important that it does contain this clause – then stronger language at the local level will prevail without any possibility for a legal challenge, even an unsuccessful one, as happened last year with the current Missouri Clean Indoor Air Act which lacks such specific wording. In fact, this bill does contain this wording:

The bill would prohibit smoking in public places, including restaurants, shopping malls and sports arenas. It is more comprehensive than the smoking ban that was passed in St. Louis City and County, which exempted casinos and bars where food sales are less than 25 percent of overall sales.

The state ban would supersede any city bans.

He was one of many who pushed the negative effects of secondhand smoke at the hearing.

Sen. Matt Bartle, R-Jackson County, who chairs the committee, asked if eating French fries should also be banned because it negatively impacts taxpayers who have to pay for Medicaid costs related to obesity.

“Because that’s the slope were on,” he said, adding, however, that he is inclined to support the bill because he finds smoking offensive.

Other proponents of the bill also pointed to increased Medicaid and Medicare costs related to diseases caused by smoking and the minimization of social smoking to those trying to quit. 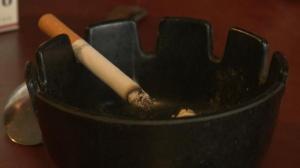 For the past three years, Jim Green’s sat in the same booth, in the same corner, at the same place.

George’s Pizza and Steakhouse is located off the Lake of the Woods exit just outside Columbia’s city limits. All of Columbia is non-smoking, but because George’s is just outside, smokers can gather. Jim Green’s smoked for 55 years, and he’s completely fine with that.

“If I want to smoke, I can sit here and smoke,” Green said.

But if Senator Joan Bray gets her way, Green’s plans may soon have to change.

34 states and nearly 70% of Americans are covered by smoking bans.

“When these go to the vote of the people, folks want it,” Bray said.

However, not everyone agrees.

Charles Clayton is the owner of the Turtle Club Bar and Grill in Ashland, and he said he is completely opposed.

“I think it’s an infringement on our freedom to operate our business. I think if the government wants to impose restrictions on our business, our customer base, then they should pay our bills,” Clayton said.

“This is not about business rights, it’s not about whether it’s right or wrong. It’s about the health of the people affected,” Sharp said.

Some of Missouri’s largest cities already have bans in place, including Columbia, Saint Louis, and Kansas City.

“Maybe it’s a good idea to have non-smoking restaurants, but why not have a few that smoke,” Larry Kerr of Columbia said.

The hearing took nearly an hour and fourteen people testified. All fourteen testified in favor of the ban.

If the ban were to pass, smoking would be prohibited in all public places, and fines would range from 50 to 500 dollars.