Both the above are best known for the City of Ballwin’s comprehensive smoke-free air ordinance which was originally sponsored by Charley Gatton. Ballwin’s ordinance is presently the strongest in the St. Louis metro area. (See Sec. 17-65. Ballwin Clean Air Act and search on title.)

The story briefly described the aims of Citizens for a Smoke-Free County (since renamed County Citizens for Cleaner Air) and Citizens Against Proposition N, whose spokesperson is Tom Sullivan.

The RFT story and photo by reporter Chad Garrison was published under the headline:

Following are excerpts from his report: 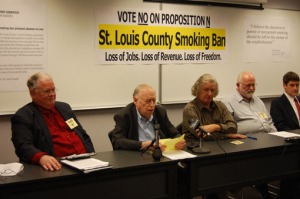 Perhaps the best-known smoker in all of St. Louis — Fred Teutenberg — was also on hand to argue against the ban. The former pitchman for Dirt Cheap Cigarettes & Beer, Teutenberg recently parted ways from his old employer to start his own low-cost tobacco store: Fred’s Cheapo Depot.

​”Let the marketplace decide the matter, not the government,” said Tuetenberg in a speech punctuated by what seemed to be a smoker’s hack.

The Rev. Harold Hendrick, director of public affairs for Christian broadcaster Bott Radio Network, said he opposes the ban because of its exemption of casinos. “Here again we have the county caving in to casinos, just so it can go to them hat in hand and make sure it’s getting its cut.”

Bill Hannegan, founder of Keep St. Louis Free, meanwhile cited statistics suggesting that county bars and restaurants could expect to lose revenue if a ban were enacted. Hannegan also warned that he and others would sue the county should the measure be voted into law.

This summer the Missouri Supreme court rejected a lawsuit challenging Kansas City’s smoking ban. Hannegan says a lawsuit against St. Louis County would not challenge the ban, per se, but the constitutionality of excluding some businesses over others.

By 9:30 pm there were 68 comments with NONE, repeat NONE from Bill Hannegan. Perhaps he was forestalled by this early comment, posted by mpkunz at 4:11PM CST, October 14, 2009:

To save people time, I can give you a head’s up on what others will post. Hannegan will start to quote a bunch of studies that purport to show that smoking bans hurt the economy and that there is no real proof that second-hand smoke harmful (raise your eyebrows here and all say, “insane”). Others will say it infringes on their civil rights. People will start calling each other names (like “insane”…. 🙂 ) and next month we will get to put this to bed and move into a smoke-free 21st century, like most of the rest of America.

A coalition of merchants and organizations in St. Louis County announced its opposition today to Proposition N, which would ban smoking in most public places throughout the county.

More than a half dozen representatives and owners of bars, restaurants, tobacco shops, bowling alleys and others said they had formed a campaign committee and planned to spend money to fight the proposed ban on the Nov. 3 ballot. The “Citizens Against Proposition N” committee contends that a smoking ban would have a negative impact on county businesses and result in a loss of freedom for owners and smokers.

Jon Rand, president of Discount Smoke Shops, said that businesses are closing already because of the poor economy. He said that as long as neighboring counties do not have smoking bans, St. Louis County businesses could be hurt by a ban and that tax revenue and jobs would decline.

“Why would you want to drive business from one county to another – put jobs in jeopardy – during a time like this?” Rand said at a news conference called by the ban’s organized opponents.

The ban would prohibit smoking in indoor public areas countywide except on casino floors, in smoking lounges at Lambert-St. Louis International Airport and in bars that have incomes from food at 25 percent or less of gross income. If voters approve, the ban would take effect on Jan. 2, 2011.

Supporters of Proposition N have formed their own committee, County Citizens for Cleaner Air. That group says that a smoking ban in public places is essential for public health and would save lives. It would be good for citizens, for workers, businesses and families, they say.

Advocates of a ban say also that the St. Louis area and Missouri lag far behind most of the rest of the country in adopting bans. Only Clayton, Ballwin and Arnold have adopted bans and a ban is on the ballot in Kirkwood in November. Other Missouri cities with bans include Kansas City, Columbia and Springfield. Illinois has a statewide ban.

“Each individual bar and restaurant owner should be able to make their own decision based on what will please their customers,” he said.

Gerard Ezvan, owner of Jon’s Pipe Shop in Clayton and a native of France who became an American citizen, said: “A smoking ban would diminish personal freedom. It would also hurt the business I have spent many years building up.”

Rev. Harold Hendrick of the Bott Radio Network denounced what he said was an “unfair and discriminatory exemption” to the ban to benefit casino gambling floors. He said St. Louis County government was “coddling casinos.”

“Once again, government has caved in to predatory casinos,” he said.